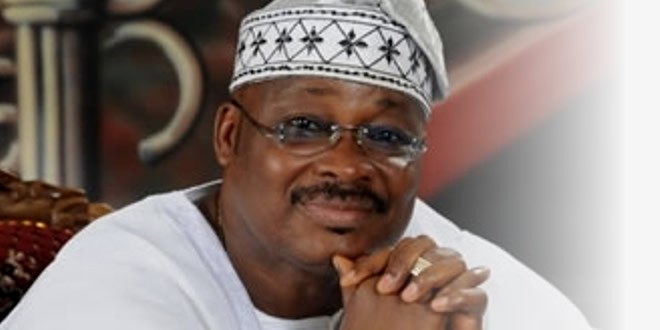 The dynasty of a late Baale of Ibadan land, Aare Obadoke Latosa, has lauded the Governor of Oyo State, Senator Abiola Ajimobi, for immortalizing the late monarch by naming one of the proposed local council development areas after him.

The commendation was contained in a September 5 letter by the Mogaji and Head of the late Aare Latosa Dynasty, Chief Hakeem Aare-Latosa, to the governor, a copy of which was made available on Monday.
The late monarch had ruled Ibadan land as Baale from 1871 to 1885, while his son, Baale Shittu Latosa also reigned in the land from 1914 to 1925.
The crown prince said that the ‘historic’ development of creating new LCDAs and naming one after the family’s progenitor was a right step in the right direction and would remain indelible in the hearts of the successive generations of the ruling house.
He pledged the total support and cooperation of the royal family towards the smooth inauguration and functioning of the proposed LCDA.
Latoosa said, “Your (Ajimobi) historic approval of the new LCDAs in Oyo State, including Aare Latosa LCDA, constitutes a laudable immortalization of Aare Latosa (1871-1885); the founder and progenitor of the Aare Latosa dynasty.
“This immeasurable development shall remain in our grateful hearts perpetually from generation to generation.
“We utilize this medium to express our unflinching support to your government and pledge to render all assistance and cooperation required for the establishment and development of our new LCDA.”
Ajimobi had on August 23 disclosed, through his Chief of Staff, Dr. Gbade Ojo, that the administration intended to carve out 35 LCDAs from the existing 33 Local Government Areas of the state to take development closer to the grassroots.
Under the proposed initiative, Ibadan zone gets 14 councils, while Ibarapa zone gets two. Four councils will be added to Oyo zone; as Ogbomoso zone gets seven, while Oke-Ogun gets eight.