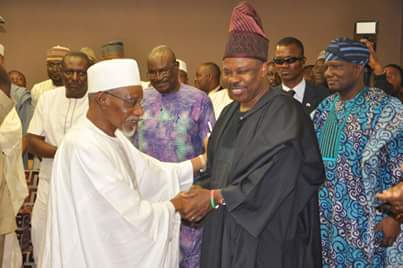 Father of the former Speaker of the House of Representatives Chief Alani Bankole has praised the Senator Ibikunle Amosun-led administration in Ogun State for restoring peace and tranquility to the gateway state.
According to a statement signed by the Senior Special Assistant (Media) to the Ogun State Governor, Adejuwon Soyinka, Alhaji Bankole stated this, on Saturday, during a lecture titled, “the Question of Nigerian Unity,” organised to celebrate his 75th birthday in Abeokuta.
While thanking the governor for the developmental strides in Ogun State under his leadership, Chief Bankole said before Governor Amosun took over the mantle of leadership, “Ogun indigenes could not sleep with their eyes closed.” He added that the story has now changed.
Chief Bankole also seized the occasion to preach unity among Nigerian politicians urging them to embrace peace and use politics as a tool to develop the nation.
In his remark, Speaker of the House of Representatives, Rt. Hon. Yakubu Dogara also preached national unity saying, “if we come together as one Nigeria, there is no challenge we won’t overcome, not even the economic challenge presently facing the nation.”
Honorable Dogara added that with the right leadership at the helms of affairs, the nation will soon experience progress disclosing that “Nigeria represents the only hope that a black man can build a nation that will be a world super power.”
The Speaker also described Alhaji Bankole as “one of the leading lights of Nigerian democracy.”
On his part, the Ogun State Governor, Senator Ibikunle Amosun, appreciated God for the life of Alhaji Bankole testifying that he has learnt so much from his wealth of experience and knowledge.
Governor Amosun equally assured that his administration will not relent its effort in honouring elder statesmen who have contributed to the development of the state and the nation in general.