The maiden edition of Charity Eid Event for IDPs with Husayn Zaguru was held in Kaduna on Saturday, with awareness to the plights of the over 30,000 Internally Displaced Persons scattered across Kaduna metropolis brought to the fore.

The event which was held at the Royal Blue Luxury International Hotel, witnessed musical performances from multi-talented Zaguru, who is a singer, song writer and an artiste, as well as a coordinated IDP group performance.

In an interview on the sidelines of the event, initiator, Husayn Zaguru said that it is an annual event.
“This program is what I do every year. It is a concert where I showcase my music career but this year we decided to bring IDPs from Rigasa and Kyauta in Millennium City, and the less privileged because we organised this Eid programme, to show them love and celebrate with them because they’re all Nigerians and any one can be a victim,” he said.
He frowned at the rich people in Nigeria for not finding time to remember those in need, and the IDPs.
“During the festive period normally we forget to celebrate with IDPs.In Kaduna we have about thirty thousand IDPs, But they don’t have an official camp most of them are living within various communities of Kaduna State.
“This is the little support and awareness from us.  And just as we have created this platform, we want people to be aware that IDPs are still existing in Kaduna. Basically that is the aim of the program for you to see they need so much assistance so that you can also give yours to them. 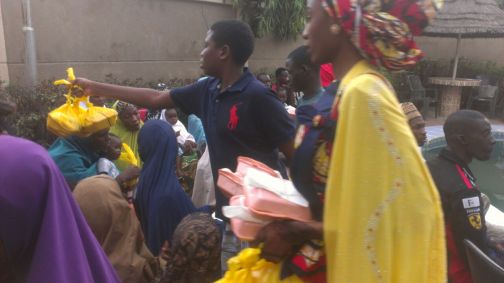 “It was a privilege for me to meet with my very beloved humanitarian and independent development worker, Ibrahim Muhammad Khalilu. We had a chat about how we could put smiles on the faces of  the IDPs, so that they will feel they  are Nigerians. You can see everything is going normal we thank God.
When asked for those that supported the event, he said that Soundedutainment Outfit funded the event, with support from C.H.I.L.D., ABMAX Media, GreenAid, Blanky for the Needy Initiative (BNI), Great Concept Pictures and Abubakar Gumi Old Students Association (AGCOSA).