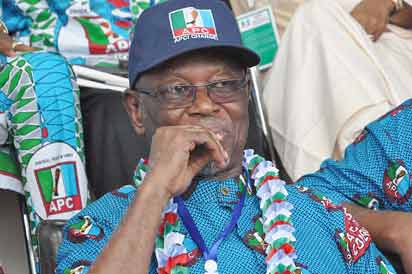 By CHRIS SULEIMAN, Abuja.
The twist and controversies surrounding the Ondo State All Progressives Congress (APC) Gubernatorial primaries forced the party’s National Working Committee to adjourn its meeting held to consider the report of the Appeal Panel Committee for the governorship primaries.
The meeting, which lasted for over three hours at the national secretariat of the party in Abuja on Monday, had all the NWC members in attendance.
The meeting was scheduled specifically to consider the report of the Appeal Panel Committee on the Ondo governorship primaries conducted on September 3,  a source at the party secretariat has revealed.
Outcome  of the governorship primaries has generated huge controversies as well as dimming whatever chances of the APC in the general election.
Chief Rotimi Akeredolu, SAN. Akeredolu defeated Engr. Segun Abraham, the preferred candidate of the national leader of APC, Senator Bola Tinubu and this has been responsible for the bitter bickering that has trailed the exercise.
Segun Abraham, Olusola Oke and Senator Ajayi Borofice had petitioned the APC Appeal Panel Committee headed by Mrs. Helen Benaga, alleging irregularities on the delegates list for the primaries.
Members of the National Working Committee present at  the meeting on Monday to consider the report of the Appeal Panel were: National Chairman, Chief John Odigie-Oyegun, two Deputy National Chairmen South and North, Engr. Segun Oni and Senator Shuiabu Lawal respectively.
Others are: National Secretariat, Mai Mala Buni, National Auditor, Chief George Moghalu, National Treasurer, Mohammed Gwagwarwa, National Organizing Secretary, Senator Osita Izunaso, Deputy National Secretariat, Hon. Oji Ngofa and all the National Vice Chairmen of the party.
The South West National Vice Chairman, Chief Pius Akinyeleru was the first to leave the meeting.
Speaking, with the National Chairman, Chief John Odigie-Oyegun on the outcome of the meeting, he stated that it was adjourned to continue tomorrow (Today).
His position was collaborated by the National Organizing Secretary, Senator Osita Izunaso.
A source revealed that the NWC members were overwhelmed with the report and probably would consult widely before taking decision on the report.