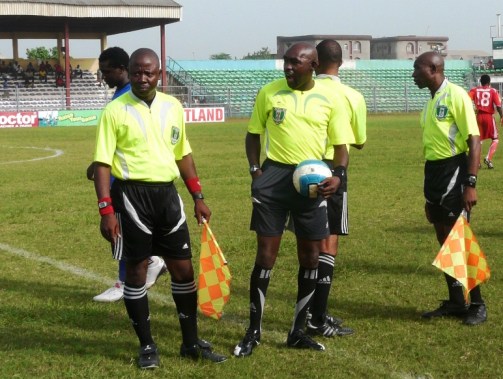 As the Nigeria football season for club competitions draws to an end, a member of the  Nigeria Football Federation, NFF, Alhaji Ahmed Fresh Yusuf,  has warned that the football house will not condone any other act of hooliganism targeted at match officials.
According to a statement signed by tbe National Publicity Secretary, Nigeria Referees Association, Kelechi Mejuobi, Fresh who is the Chairman of the NFF Referees Committee noted that the era of attacking referees after matches should be a forgone alternative for clubs as the matches of the Premier and National Leagues draw to an end.
Addressing newsmen at the National Stadium, Abuja venue of the rescheduled FIFA Fitness Test,  Fresh who is also the Vice Chairman of NFF Technical Committee and member of CAF bodies disclosed that the federation will descend heavily on clubs, venues and supporters found wanting adding that appropriate sanctions as stipulated in the regulations of the organisers shall be applied against offenders.
The Referees’ Committee chairman noted that the FIFA Fitness Test is an annual ritual performed by all CAF and FIFA affiliated member countries this time every year, to not only assess the physical fitness of the international referees but also an opportunity to chose new ones if a vacancy occurs  due to any  inability or retirement.
Fresh used the opportunity to assure clubs that adequate measures have been taken to ensure the best hands are deployed to handle the last round of matches in the remaining weeks in both leagues.
The NRA president, Tade Azeez,  in his own contributions informed that the rescheduled physical fitness test came as a result of the inability of the participants to provide the required Comprehensive Medical Report, stipulated by FIFA for referees participation. According to Tade, the lives of the referees are more important, hence, the insistence on the provision of medical report before participation.
“It is an international prescription from FIFA and we must comply. Life first is the watchword. The first exercise took place last week and we are completing it this week after they participants have undergone medical clearance and permission from doctors to take part”, Tade added.
On number of matches available to referees, the NRA president told newsmen that a mechanism to ensure equitable distribution was adopted even as number of matches is limited compared to the quantity of referees especially in the National League.
Tade while assuring stakeholders in the domestic leagues however  stated that no amount of intimidation and attacks from clubs and their supporters will stop referees from putting in their best for the good of the game. Said he “NRA members cannot succumb to the assaults from clubs in the course of been fair and firm in the course of doing our duties especially now the leagues are closing shops”
Earlier, the event was declared open by the NFF General Secretary, GS,  Dr Mohamed Sanusi who  charged the FIFA referees to be worthy ambassadors of Nigeria in all their local and international outings. Dr Sanusi reiterated the commitment of the NFF to the growth of referees in the country.
About 20 male and female referees took part in the exercise at the National Stadium supervised by the Secretary of the NFF Referees Committee and NRA Deputy President, Hon Sanni Zubairu, FIFA Rtd and the chief technical official, Engr Emmanuel Imiere ( FIFA Rtd). Other members of the NFF Referees Committee include former NRA president, Alhaji Ahmed Maude, Mazi Linus Mba, Dave Egho, NRA Vice President 1, Elder E.D Olokor, NRA National Financial Secretary,  and Sir E.C Chukwuemeka.