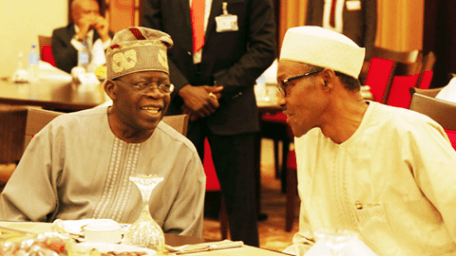 By CHRIS SULEIMAN, Abuja
The  National Working Committee (NWC) of the ruling All Progressives Congress (APC) have been caught in a web of confusion over the lingering crisis emanating from the Ondo gubernatorial primaries and have rushed to the presidency on Thursday to seek for advice over decision to take concerning the report of appeals committee, where they were ‘ordered’ to favour the candidate of the National Leader, Bola Tinubu.

For four consecutive days, the Oyegun led APC leadership have been meeting over the issue but yet to come out of the shock.
It was gathered reliably that the appeal committee were able to proved beyond reasonable doubt that the delegates list used at the primary election were doctored.
A senior member of the party who does not want his name mentioned in print revealed yesterday at the APC national secretariat that the problem became more complicated because some of the NWC were also doing the bidding of some prominent leaders of the party.
The controversial primary election produced Owo-born former National President of Nigeria Bar Association, Rotimi Akeredolu (SAN) against the candidate of the party’s national leader, Segun Abraham.
Though the NWC has refused to make its report public by either approving or disapproving of the Election Appeals Committee which had earlier recommended the cancellation of the primaries and called for a fresh exercise, it was gathered that President Muhammadu Buhari had however, lost confidence in the Oyegun leadership style.
It was, however, confirmed by a member NWC they were to seek the opinion of the President over the Ondo decision to be taken while some of the officers believe that the visit was needless.
The source said: “The President had to call the Secretary to the Government of the Federation and National Chairman of the party yesterday (Wednesday) and told them that South-West belongs to Tinubu. He said they should allow him have his way in the region.
The chieftain continued: “The President is aware there are people within and outside the party who want himself and Tinubu to be on war path. He is wise enough and recognizes the part Tinubu played to bring him to power, and knows Tinubu’s strength in 2019 elections.”
Learn how you can earn at least $500 from the comfort of your home by clicking this link: http://TheTasksPay.com/?g=143814