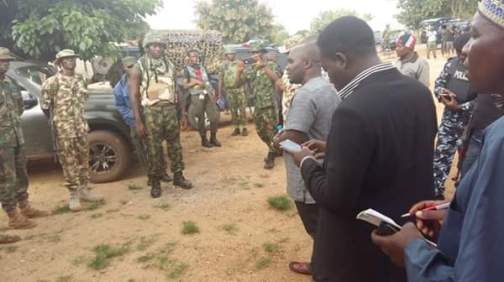 ​At least no fewer than two persons  have been reportedly killed by suspected Fulani herdsmen in Anta community of southern Kaduna State in an attack said to have occurred at about 2;30 -3am, this as Southern Kaduna elders forum  accused Governor Nasiru El-Rufai to be the  alleged sponsor of the dastardly murder.
Learn how you can earn at least $500 from the comfort of your home by clicking this link: http://TheTasksPay.com/?g=143814

The father Mr Iliya Manja , the son Istifanus Iliya were killed while the wife Mrs Hanatiu Iliya who survived the attack is faced with injuries, in the attack that happened in the early hours of Monday leaving a trace of  destruction of lives and properties.

Our correspondent gathered that community of over 200 houses of Kafachan under Kwoi local Government Council of Kaduna state has been under siege by a group of suspected herdsmen.

At the time of this filling report there is ongoing heavy armed presence of alleged Fulani herdsmen who has overrun the village, sacking the residents with no single human being present.

The wife Mrs Hanatiu Iliya who sustained various degrees of injuries had been rushed to Kafachan general hospital for treatment while the village has been deserted.

Speaking to our reporter on phone, Elder brother of the deceased name withheld accused Mallam Nasiru El-Rufai of killings the Christian ahead of 2019 ambition.

He expressed sadness at the scene that for almost two days ago there has been serious exchange of gun shots yet no government presence, we only sighted two aimless policemen who came and left immediately.

“we are appealing to federal government to come to the rescue of our people before El-rufai finish our people and at the time of filing in this report no single human being is  the village “,he added.

This latest attack is coming few hours after the Nigerian Army repelled an attack on Godogodo, another Southern Kaduna Community.