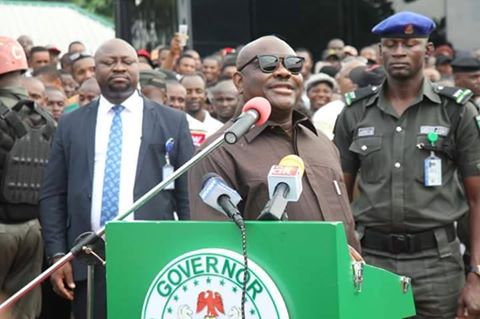 By PRECIOUS IBINABO DAVIDS, Port Harcourt
Rivers State Governor, Nyesom Ezenwo Wike has given his assent to the 2017 Appropriation Law passed by the Rivers State House of Assembly, with a pledge to accelerate the development of the State.
According to a statement signed by his Special Assistant Electronic Media, Simeon Nwakaudu, the Rivers State Government budgeted N470billion for the 2017 Fiscal year.
The 2017 budget is christened “the Golden Jubilee budget for accelerated development.”
Giving his assent to the 2017 budget, Governor Wike commended the Rivers State House of Assembly for always placing the interest of the people above other considerations.
He said: “You passed the budget on time so that the State Government will continue to deliver dividends of democracy to the good people of Rivers State.
“I sincerely thank the state lawmakers for supporting the Executive Arm to provide basic infrastructure to the people of the state”.
He noted that his administration will ensure the diligent implementation of the 2017 budget in line with the tenets of the New Rivers Vision.
He said that funds meant for other arms of government will released as scheduled.
He said: “The Executive Arm of government will continue to cooperate with other arms of the state government to develop the state ”
The governor assured the state lawmakers that his administration will remain focused , despite the undemocratic actions against the Rivers people.
Responding, Speaker of the Rivers State House of Assembly, Rt Hon Ikuinyi-Owaji Ibani lauded Governor Wike for providing the right leadership for the state.
He said that the 2017 budget will intensify the transformation of the state.
He said: “This government means well for the people of Rivers State. We will continue to give the governor the required support for the development of the State “.
The signing of the budget into law was witnessed by the State Deputy Governor, Dr Ipalibo Harry Banigo, the Former Acting National Chairman of PDP, Prince Uche Secondus, Rivers PDP Chairman, Bro Felix Obuah, State Lawmakers and Commissioners.
A breakdown of the 2017 budget indicates that the total projected capital expenditure is N329 billion (three hundred and twenty-nine billion naira) representing 70percent, while N141, 000,000,000.00 (one hundred and forty-one billion naira) is proposed for recurrent expenditure.
.​