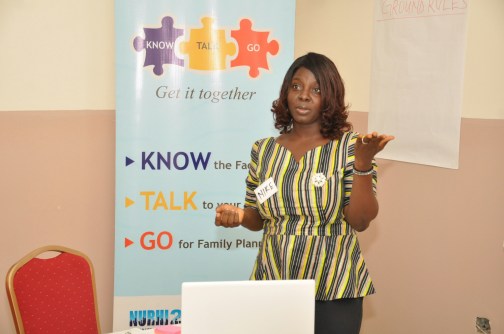 The high maternal mortality rates in the North, compared to Southern
Nigeria has been linked to lower percentage of Contraceptive
Prevalence Rate (CPR), which increases the risk of such deaths.
State Team Leader, Nigerian Urban  Reproductive Health  Initiatives
(NURHI), Kabir M. Abdullahi stated this , while presenting a paper
titled: ‘Family Planning as a Tool For Sustainable Development’ at a
two-day workshop for Bloggers on Effective Family Planning Projection,
which opened in Kaduna on Wednesday.
He said that CPR rate in the South East is 23.4 per cent, South West
stands at 31.7 percent, North Central is 13.0 per cent, while the
North East and the North West have CPR of 4.0 and 2.8 per cent
respectively.
According to him, several factors are responsible for such preventable
deaths, including lack of enough spacing between pregnancies.
He said that the life of every woman matters, hence the need for all
stakeholders including policy makers, religious and traditional
leaders, political elites and the media to step up their game in
sensitizing people on the need for child spacing.
Abdullahi said that even though the society has moved away from
primitive lifestyles in other aspects, most, as a result of norms that
they met in their traditional settings, find it difficult to break
away from the belief that they should raise very large families with
several children.
“Birthing practices in the country remain the same, changing slowly,
while movement from rural areas to cities is increasing rapidly, also
contributing negatively to the quality of life they get.
“Norms like having large family sizes are still embraced today, just
like it was in those days when such large families meant more wealth
generation through commercial activities like farming which required
more hands, unlike in the cities that are dependent on industries and
provision of services.
Speaking further, he said that what was critical is not just knowing
the statistics related to maternal mortality rates, but knowing what
to do to prevent such tragic occurrences.
In an illustration, he said that for example, when a woman is
delivered of a baby, 15 minutes later, it is expected that a
contraption takes place in the womb that makes the placenta to detach,
a development that stops bleeding.
“However, if a woman over stretches the womb through frequent child
births, it becomes weak and may fail to contract, which may lead to
her death,” he explained.
In his presentation,  Lead Consultant, Kuturanki Systems, Mr. Silas
Auta  said that bloggers can make a change in the equation of child
spacing through effective use of the various social media.
He explained that the reading trend is changing, with more people
getting their source of information from online sources, a trend he
said would be fully evolved by 2020.
He advised bloggers to take advantage of the spontaneity of social
media tools like Twitter in reaching millions of potential audience,
stressing that with constant authoritative tweets, the numbers of
their followers are sure to grow.
The workshop continues on Thursday, where  the bloggers and media
practitioners would be  lectured on several topics, including; ‘Media
involvement in reducing maternal, newborn and child mortality in
Nigeria, to be presented by Mr. Iliya Kure, who is a Media Specialist.
At the end of the workshop, an action plan is expected to be adopted
to support NURHI Advocacy on the social media.